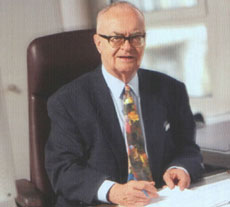 “Everything is difficult………before it is easy!

We have the sad duty to inform you that the founder of Fracht AG, Basel, Switzerland passed away peacefully after a short stay in hospital. He had a long, successful and beautiful life full of outstanding achievements, not only in business but also for charity. He will be fondly remembered by his family and all his friends in many countries around the world.

The management of the worldwide Fracht organisation was transferred to the founder’s son – Mr. Ruedi Reisdorf junior – many years ago and he will continue to lead the successful growth of the group.