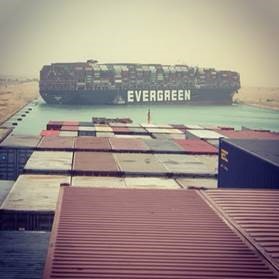 200,000-tonne Ever Given en route from the Red Sea ran aground after the ship suffered a blackout.

More than 150 years old, the Suez Canal is one of the world's most important trade routes, providing passage for 10 percent of all international maritime trade [File: Mohamed Abd El Ghany/Reuters]

A container ship heading to Rotterdam has ran aground in the Suez Canal, blocking other vessels from travelling through one of the world’s busiest waterways, according to shipping company GAC and shipping data on Refinitiv Eikon.
The 200,000-tonne vessel en route from the Red Sea to the Mediterranean ran aground at about 7:40am (05:40 GMT) on Tuesday after the ship suffered a blackout, GAC said on its website.
It added that 15 other ships in the northbound convoy behind the vessel were detained at anchorages waiting for the Canal to be cleared. A southbound convoy was also blocked, GAC said.
The container ship, the Ever Given, is 400 metres long (1,312 feet), 59 metres wide (193 feet), and can carry up to 20,000 20-foot (6.09 metres) equivalent (TEU) shipping containers.
Images posted on social media showed the ship, with a full cargo, blocking the entire canal lane.
Taiwan’s Evergreen Marine Corp, which is leasing the vessel under a time charter, said the shipowner had informed it that the vessel “was suspected of being hit by a sudden strong wind, causing the hull to deviate from waterway and accidentally hit the bottom and run aground.
“The company has urged the shipowner to report the cause of the accident and to work out a plan with related units such as the canal administration to assist the ship in getting out of trouble as soon as possible,” Evergreen said in a statement.
The Suez Canal authorities, could not be immediately reached for comment.
More than 150 years old, the Suez Canal is one of the world’s most important trade routes and about 10 percent of all international maritime trade travels through it. Nearly 19,000 ships, or an average of 51.5 ships per day, with a net tonnage of 1.17 billion tonnes passed through the canal during 2020, to according to the Suez Canal Authority (SCA).
The canal has been a boon for Egypt’s struggling economy in recent years, with the country earning $5.61bn in revenues from the waterway last year.
In February, President Abdel Fattah el-Sisi ordered his cabinet to adopt a “flexible marketing policy” for the canal in order to cope with the economic downturn caused by COVID-19.
Egyptian authorities are yet to comment on the tanker incident.
In 2018, Suez Canal was also temporarily shut after a Greek-owned container ship suffered engine failure that led to a five-ship collision.
In 2014, the 324-metre (1,062 feet) container ship Colombo Express also lost control and slammed into the side of the similarly-sized Maersk Tanjong.
Share this news via